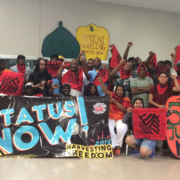 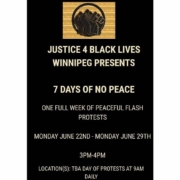 #TheResistanceCampaign will be moderating this webinar featuring guests Sylvia McAdam Saysewahum (Treaty 6 lands), Chief Judy Wilson (Neskonlith Nation), and Russ Diabo (Kahnawake). We will be discussing the White Paper Agenda and the urgency of taking action against this legislation.  The webinar will be streamed live on Sunday May 26 from 5pm – 6pm EST

In this Webinar, we will be discussing a deeper understanding of what the ‘White Paper 2.0’ means and how Indigenous peoples are impacted by this. Discussions will also address specific Bills that are scheduled to pass in June 2019 that directly affect the rights and title of Indigenous people.  We encourage the public to join in on this Webinar as there will be opportunities to ask questions for our panelists to answer.

It is Now Our Generation’s Turn to Mobilize to Stop Canada’s Termination Plan!

Today a National Strategy Meeting was held in Edmonton, Alberta by concerned elders, leaders and peoples from Treaty and Inherent Rights & Title Based Original Nations.

Information was presented to the participants about the Trudeau government’s massive changes to federal policy, law and structure, which amount to a renewed Termination Plan. What we call White Paper 2.0. The meeting participants also discussed an action plan to stop the latest version of the federal government’s Plan to Terminate our Treaty and Inherent rights.

Question: What is the Danger to First Nations?

Since being elected in 2015, the Trudeau government has been implementing its national pan-Indigenous approach through various top-down, back-room processes using the three National Indigenous Organizations, including the Assembly of First Nations to “co-develop” changes to policy and law. The AFN National Chief Perry Bellegarde has signed two agreements with the federal government: one on developing a new fiscal policy and one on shared priorities.

On May 1, 2, 2019, instead of holding an urgent Chiefs’ Assembly the AFN is holding an expensive policy forum with a stacked agenda to discuss four federal policies: 1) ‘Inherent Right’ Policy; Comprehensive Land Claims Policy; Specific Claims Policy and the Additions-To-Reserve Policy.  To bring attention to the threat these legislative and policy changes have on our future, people within the Indigenous Activist Networks have initiated a rally to be held in Edmonton, Alberta (old Indian Association of Alberta office).

Since February 2019, the federal Minister of Crown-Indigenous Relations, Carolyn Bennett has been conducting a selective engagement process to replace the ‘Inherent Right’ and Comprehensive Land Claims Policies with a new “Rights-Based” Policy by June 2019. Minister Bennett has publicly said the federal government is working with their “partners” to replace these policies.

The federal “partners” are the 75 “Recognition & Self-Determination” tables set up by the Trudeau government in 2016 and the 50 groups at “Modern Treaty” & Self-Government Agreement tables.

To get support for their new policy changes, the federal government has announced it is forgiving/repaying $1.4 billion loans to those groups negotiating/settling under the comprehensive land claims policy.

For More Information on the new “rights based” policy to be introduced June 2019, please click here for the full briefing note.

For a downloadable poster about the campaign please click here.

For a fact sheet about the White Paper and Red Paper please click here.

Violence against Indigenous women, girls, trans and two-spirit people is one of the most pressing human rights issue in Canada today. We know that the over-representation on homicides, poverty, homelessness, child apprehensions, police street checks, incarceration, and overdose fatalities is not a coincidence; it is part of an infrastructure of gendered colonial violence. Colonial state practices target women for removal from Indigenous lands, tear children from their families, enforce impoverishment, and manufacture the conditions for dehumanization.

Authored by Carol Muree Martin (Nisga’a and Gitanyow) and Harsha Walia with 128 collaborators, the compelling stories, rigorous research, and holistic recommendations within the 220-page report drastically and urgently shifts the lens from pathologizing poverty towards amplifying resistance to and healing from all forms of gendered colonial violence.

On February 26, 2017, a Saskatchewan Parks officer issued a warning to Idle No More co-founder Sylvia McAdam (Saysewahum) and her brother Kurtis McAdam (Saysewahum). The warning advised them to vacate their ancestral homelands, land that their family has lived on since before European encroachment and land that was promised to their relations during Treaty 6 negotiations. Sylvia and Kurtis did not comply with the order and now must stand trial for contravening Section 25(1) of the Parks Act. Both Sylvia and Kurtis face fines and the possibility of imprisonment if convicted.

Idle No More and Defenders of the Lands stand in solidarity with Sylvia McAdam (Saysewahum) and Kurtis McAdam (Saysewahum). We insist that Canada, including the province of Saskatchewan, adopt Call to Action 45 (i) of the Truth and Reconciliation Commission’s Report—that is “to repudiate concepts used to justify European sovereignty over Indigenous lands and peoples such as the Doctrine of Discovery and terra nullius.”

At the heart of this legal battle is the Doctrine of Discovery. The Canadian government, including the provinces and territories, have, since the creation of Canada and the 1867 Canadian Constitution Act, assumed control over Indigenous lands.

The trial of Sylvia and Kurtis will take place on March 20-22, 2019, in Prince Albert, Saskatchewan, in courtroom #5, starting at 9:30am. Please attend the trial and/or show your solidarity and support of the “accused.”

In response, Canada’s colonial courts have granted an injunction allowing the RCMP to evict these land defenders from their lands to facilitate construction of a fracked gas pipeline. Members of the RCMP met with Hereditary Chiefs and indicated that specially trained tactical forces will soon be deployed to forcibly remove the camps, checkpoints and people from their land.

Today the Unist’ot’en face the possibility that the full violence of the Canadian state will be brought to bear against them. In response, people across Turtle Island are holding rallies in solidarity with the Gitdumt’en and Unist’ot’en, and to protest Canada’s illegal encroachment on Wet’suwet’en land.

The message of the rally organizers is clear: “Indigenous law is the law of the land on unceded territories, and traditional title-holders have the right to refuse access to their lands. Disregarding this ancient law in order to further expand fossil fuel production during a time of extreme climate crisis is totally unacceptable. Agents of the corporate state will face resistance if they continue to pursue resource colonialism during this climate emergency” International Day of Action for Gitdumt’en and Unist’ot’en.

The Norwegian government recently decided to forcefully slaughter most of Jovsset Ánte Sara’s reindeer herd to a level that he cannot make a living from. The slaughter is scheduled for the end of 2018.

In 2015, Jovsset Ánte sued the government for the decision to slaughter his reindeer that in reality pushes him away from his livelihood, culture and way of life. Sara won his case against the state of Norway in the two lower national courts but in the Supreme Court he was ruled to decimate his herd. His case is appealed to the United Nations Human Rights Committee but the Norwegian government refuses wait for the committee’s recommendation. By upholding the Supreme Court’s fatal decision, the state of Norway shows no concern for the human tragedy this will impose on the Sara family.  Jovsset Ánte Sara’s has support from the Sámi Nation who stand behind him and his family.

Idle No More urges the Norwegian government to reconsider their decision and wait for the UN`s Human Rights Committee’s recommendations.

In this email update, we are sharing some exciting news from the Indigenous folks who are working for sustainable solutions for not only our communities but also to provide models other communities can pick up to apply at home. We get to learn more from folks who are showing how to lead in result based solutions.

This coming weekend, Alex Wilson of the One House Many Nations campaign and the Idle No More network, will be joining Michelle Brass of Indigenous Climate Action, at the Just Transitions: Building Saskatchewan’s Next Economy summit at the Campus Regina Public institution. They will be presenting “Decolonizing the Transition” on Sunday, October 28th, 2018 at 10:00 a.m. This public event is free and child minding services are available for those who need them. The Transition Summit runs from Saturday, October 27th to Sunday, October 28th, 2018.

The workshop topics and speakers presentations will include:

Beginning today, the Tiny House Warriors have launched an online auction to raise funds. The first auction proceeds were applied entirely towards the purchase of a truck which was required to mobilize the Tiny House’s, the teams have already built, through unceded Secwepemcul’ecw.

Tiny House Warriors, stewards & protectors of unceded Secwepemc territory are maintaining vigilant surveillance over Secwepemc lands and sacred headwaters. The Tiny House warriors need your support to help winterize the camp and build it up with enough supplies to last through the long winter months.

How It Works: Artists, crafter, donors, and generally generous folks donate an item to the online, Facebook Auction Event page by posting one picture of the auction item and include their auction winner terms. For example, “Winning bidder pays to ship.” or “Winning bid includes shipping” are but some of the terms donors require. Interested buyers make the bids in the comment section of the post and make the payment for the winning bid item directly to the Tiny House Warriors, while shipping payment and arrangements are worked out between the donor and winner.

In case you missed our widely viewed, live-streamed YouTube webinar on the Federal “Rights and Recognition” Framework, we have included here, in our email update. Due to technical issues related to internet connections, we were unable to wrap up the discussion with our guest panelist Rachel Snow, as we had originally planned. We still were able to provide you with a great deal of information, in spite of our connectivity problems. We plan on having Rachel Snow back to speak about the Federal Framework, but in a different format, quite possibly a podcast. Stay tuned for that in the future. Below is a complete list of the tools our joint team has released to date: