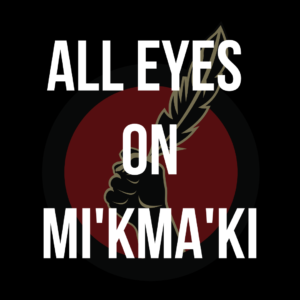 Idle No More calls for A National Week of Action on Monday October 19th to Friday, October 23rd in support of the Mi’kmaq peoples’ inherent right to fishing. The Mi’kmaq people are requesting that Indigenous Nations and allies alike take action in order to amplify the calls for justice in Mi’kmaki territory. The violent actions of the commercial fishermen against Indigenous people is terrorist vigilantism. Mi’kmaq people have been threatened, physically attacked, fishing boats have been damaged, and lobster pounds have been destroyed. The inaction of the federal and provincial government and the RCMP to protect Mi’kmaq people is a violation of Indigenous inherent rights, Treaty rights, and the United Nations Declaration on the Rights of Indigenous People. This is not reconciliation.

“Over 250 years ago the Peace and Friendship Treaty of 1752 promised Mi’kmaq people the right to hunt and fish their lands and establish trade. In 1999, the Supreme Court of Canada issued a landmark ruling making it clear that the Mi’kmaq and Maliseet people had the right to earn a “moderate livelihood”, even in the off-season”.  BBC News

“The inability for Mikmaw people to access their constitutionally protected inherent rights is a gross violation, and abolishes reconciliation. It is because of this that we are requesting assistance from our sister nations and allies” Mi’kmaw warrior Suzanne Patles

The RCMP have also been criticised for their inaction and Mi’kmaq Warrior Peacekeepers have arrived to protect people from violence.

Mi’kmaq land defenders are requesting that people lift their pipes and light their medicines, and are calling for groups to gather in support of Mi’kmaq inherent rights. We need all allies on deck as settlers continue to escalate violent tactics to intimidate members of the Mi’kmaq nation. 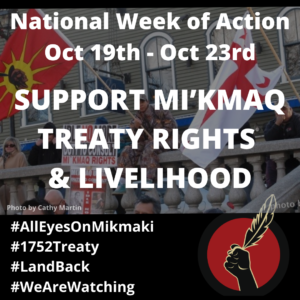 Aside from in-person actions, here are other tangible ways to support from wherever you may be:

Idle No More Stands in Solidarity with #WWOA