Instead we will gather to honour all of the lives lost to the Canadian State – Indigenous lives, Black Lives, Migrant lives, Women and Trans and 2Spirit lives – all of the relatives that we have lost. We will use our voices for MMIWG2S, Child Welfare, Birth Alerts, Forced Sterilization, Police/RCMP brutality and all of the injustices we face.  We will honour our connections to each other and to the Water, Land, and Sky.

See full program and bios of guests below. 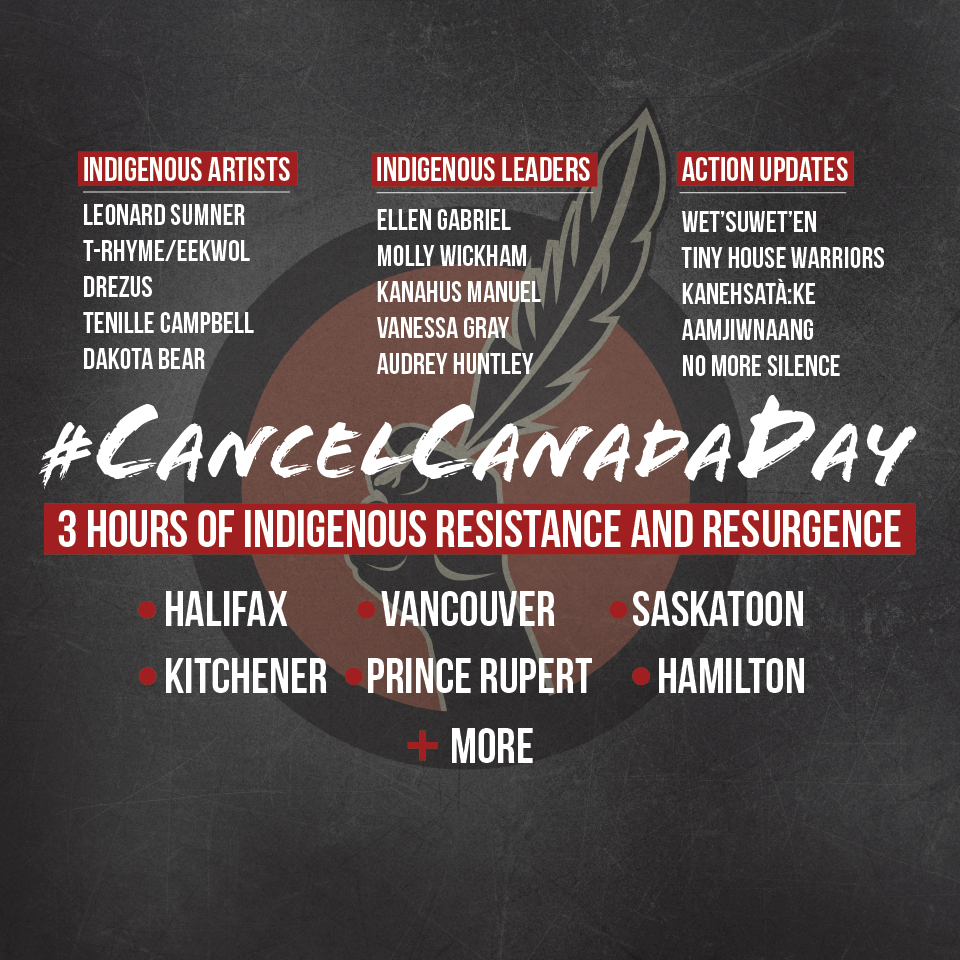 Bios and Links for #CancelCanadaDay Guests

Ellen Gabriel is Indigenous Human Rights Activist and Visual Artist. Ms. Gabriel was well-known to the public when she was chosen by the People of the Longhouse and her community of Kanehsatà:ke to be their spokesperson during the 1990 “Oka” Crisis; to protect the Pines from the expansion of a 9 hole golf course in “Oka”. Since then, she has advocated for the collective and individual human rights of Indigenous peoples and has worked diligently to sensitize the public, academics, instructing authorities and politicians on the history, culture and identity of Indigenous peoples. Ms. Gabriel’s impact on the history of resistance on these lands cannot be overstated.

Sleydo’(Molly Wickham) is the spokesperson for the Gidimt’en check-point on Wet’suwet’en territory, which has been occupied since 2018 and raided twice by militarized RCMP. She holds the name in Cas Yikh (grizzly house) and has been living on and occupying the territory since 2014 with her husband and children.

Vanessa Gray is a 27 year old Queer Anishinaabe kwe from the Aamjiwnaang First Nation, located in Canada’s Chemical Valley. As a grassroots organizer, land defender and educator, Vanessa works to decolonize environmental justice research by linking scholarly findings to traditional teachings. Vanessa is a co-founder of Aamjiwnaang & Sarnia Against Pipelines (ASAP), host of the annual Toxic Tour of Canada’s Chemical Valley. She continues to take part in a diversity of tactics such direct action, classroom lectures, co-hosting Toxic Tours and Water Gatherings.

Sylvia McAdam (Saysewahum) is a nêhiyaw woman, a citizen of the nêhiyaw Nation, who holds a Juris Doctorate (LL.B) from the University of Saskatchewan and a Bachelor’s of Human Justice (B.H.J) from the University of Regina. She is a recipient of the Carol Geller Human Rights Award, Foreign Policy’s Top 100 Global Thinkers Award, Social Justice Award, 2014 Global Citizen Award, among others. Sylvia was one of the co-founders of the global grassroots movement, Idle No More, and has travelled the world extensively, working with Indigenous leaders and community organizers building better worlds for our peoples. Sylvia is the author of Nationhood Interrupted: Revitalizing nehiyaw legal systems.

Leonard Sumner is an Anishinaabe singer-songwriter from the Little Saskatchewan First Nation, whose music blends aspects of country, folk and hip hop music. He is most noted for his 2018 album Standing in the Light, which received a Juno Award nomination for Indigenous Music Album of the Year at the Juno Awards of 2019.

TASHA SPILLETT-SUMNER (she/her/hers) draws her strength from both her Nehiyaw and Trinidadian bloodlines. She is a celebrated educator, poet, and emerging scholar. Tasha is most heart-tied to contributing to community-led work that centres on land and water defence, and the protection of Indigenous women and girls. Tasha is currently working on her PhD in Education through the University of Saskatchewan, where she holds a Vanier Canada Award. She is the author of the graphic novel, “Surviving the City”, published by Portage & Main Press.

Drezus (drē-zəˈs; born Jeremiah Manitopyes; August 28, 1982) is an indigenous rapper and activist based in Calgary, Alberta. Drezus’ accomplishments in the field of music include awards for Best Music Video, Best Producer/Engineer, Best Rap/Hip Hop Album, and Indigenous Entertainer of the Year. These awards followed the success of his album, Indian Warpath, released in the summer of 2014.

Using the spirit and sound of Hip Hop’s Golden Era, Tara “T-Rhyme” Campbell shines a spotlight on her poetry and life experiences through her music. Pride in her Denesuline and Northern Cree roots has served as inspiration and motivated her to become an artist for Indigenous women and youth to relate to. She is also a prominent, extremely skilled beadwork artist, and you can find her work on instagram at @BeadsRhymesLife.

Lindsay Knight aka Eekwol (Hip-Hop Emcee) In Eekwol’s world, mothering, music and academics are chaotically coordinated into a delicate balance. As a well-known and dedicated hip hop emcee, Eekwol astounds her listeners with honest, direct and revolutionary words that come from places both original and unknown, and always groundbreaking. As a member of Muskoday First Nation, she holds a lifelong background of Plains Cree Indigenous music and culture and invites the audience into a space of experimental hip hop unique to her land and place while respecting the origins of hip hop. For albums, Eekwol has previously released Niso, The List, Apprentice to the Mystery, and Soundsick?! with countless features and collaborations on other albums with other artists.

Dakota Ray Hebert was born and raised in Meadow Lake, Saskatchewan. She has performed as an actor and comedian across Canada, the United States, La Peñita Mexico, and even Shenzhen China! She’s opened for comedians such as Ryan McMahon, Kathleen McGee, Kelly Taylor, Derek Seguin, Lisa Baker, and many more.

You can see Dakota Ray in her many silly YouTube videos, including ‘Dakota Tries…’! She cohosts a tv show on APTN called Crazy Like a Lynx alongside Don Kelly and her first feature film premiers this fall.

Tenille K Campbell is a Dene/Métis author and photographer from English River First Nation, SK. She completed her MFA in Creative Writing from UBC and is enrolled in her PhD at the University of Saskatchewan. Her inaugural poetry book, #IndianLovePoems (Signature Editions, 2017) is an award-winning collection of poetry that focuses on Indigenous Erotica, using humour and storytelling to reclaim and explore ideas of Indigenous sexuality. She is also the artist behind sweetmoon photography and the co-creator of tea&bannock. She currently resides in Saskatoon.

Khodi Dill is a husband, father, writer, educator, and spoken word artist. Khodi spoke at the first so-named Idle No More teach-in at Station 20 West in Saskatoon, in the winter of 2012. He is a former Saskatoon slam poetry champion, and his poetry has been featured in The Great Black North: Contemporary African Canadian Poetry.  Dill writes and teaches English in Saskatoon, and is at the helm of the social justice blog thegreygriot.com.

Audrey Huntley is of mixed Anishnawbe and EuroSettler ancestry. She has been part of social movements fighting for a world free of racism, sexism and other forms of oppression in Europe and here on Turtle Island since 1998. She is a filmmaker and the co-founder of the Toronto based network No More Silence. The group works to honour missing and murdered Indigenous women, girls, trans and Two Spirit people by supporting community efforts to end settler colonial violence, reclaim and defend land while asserting sovereignty. In her day job, she is the victim rights paralegal at Aboriginal Legal Services.