Unsettling Canada: A National Wake-up Call by Arthur Manuel and Grand Chief Ron Derrickson and a foreward by Naomi Klein.

Together the Secwepemc activist intellectual and the Syilx (Okanagan) businessman bring a fresh perspective and new ideas to Canada’s most glaring piece of unfinished business: the place of Indigenous peoples within the country’s political and economic space. The story is told through Arthur’s voice but he traces both of their individual struggles against the colonialist and often racist structures that have been erected to keep Indigenous peoples in their place in Canada.

In the final chapters and in the Grand Chief’s afterword, they not only set out a plan for a new sustainable indigenous economy, but lay out a roadmap for getting there. Order your copy here. 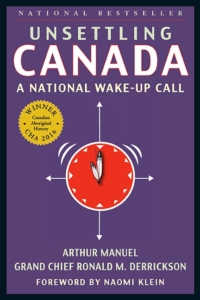 All My Relations Podcast
Scroll to top